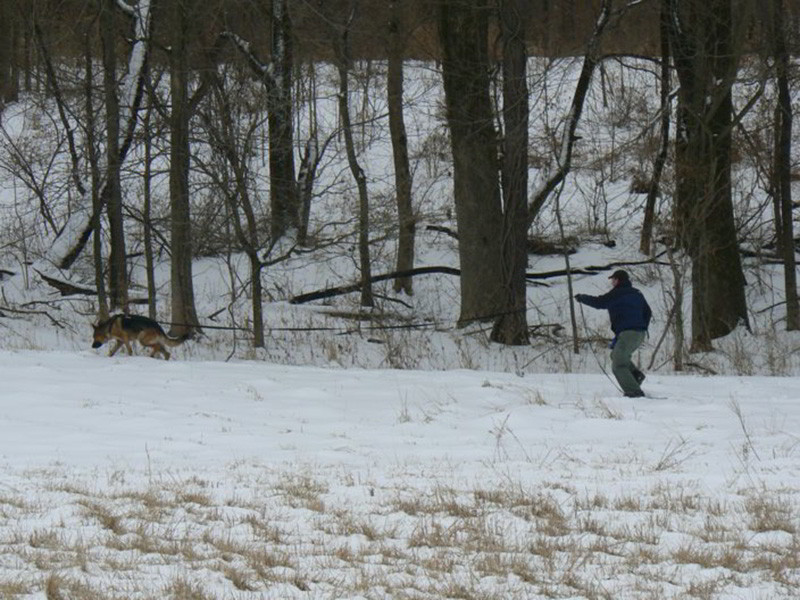 We were the 2nd track to run, and 1 of 4 that passed in this 6 dog test with 12 alternates. It was Rudy’s kind of weather and his day. Rudy and I worked and were a team. He was totally on the track that day, forcing me to hang on for the ride as we made our way through light snow on an icy crust that I punched through up to my ankles about every 4th step. He worked with his nose down pulling the leash tight as you can see in the photo.

The 835 yard track included 370 yards of woods with slopes and at least 20 fallen trees to cross. Our track layer and the judges said it was the most difficult track they laid and some considered making it the Alternate Track. Rudy loved the woods and worked it without wondering off track. My job was to keep the leash from tangling and to keep up with him.

We had to slow a couple of times to clearly indicate the articles: a sock on leg 2 and then a hat on leg 6 which I held up to the judges to see. Near a road with passing cars he slowed to check things out and alert to the judges’ group appearing from the brush behind us. I re-scented him and we were on our way again, making the right turn down a hill (digging in my heels so I would not fall) and into the woods again where Rudy ran 45 yards straight to the Glove!
Our Judges, Bill Willoh (left) and Vince Ramirez (right), complemented us on our run by saying “Rudy set the bar high for that test that day.” I was out of breath and hot since Rudy finished the track in 17 minutes. I know speed is not important. Rudy was working and knew his job without question.
I want to thank my mentor for all the support and teaching we received. Also, I want to thank the Mittelwest Team who supported our tracking and training efforts; especially Pam Kalvaitis owner of Cody – Rudy’s father, and Julie and Tessa Martinez who we trained with at Mittelwest Kennels. Their support and teaching has helped me to be a better handler and Rudy a more focused GSD.

And last, but not least, Ule James the photographer that put together a chronology of photos for our track (and all test participants) that was priceless. I have near seen photos that represented such a keen eye for the sport and understanding of the camera! They gave me a prospective to remember where we were during test that was a total blur to me. The link to all the photos is below. Note that the picture name is at the lower right hand side of the pictures. Rudy and I were team TDX2. MORE PHOTOS – CLICK HERE

This was a series of firsts. Rudy is the first dog that I have ever tracked. I learned that Gateway Tracking Club was the first AKC standalone tracking club founded in 1979. It seems appropriate that Rudy earned his TDX with them since he earned his TD at the German Shepherd Dog Training Club of Chicago, the first German Shepherd Specialty Club in the United States! Only 14 to 17 GSDs earn this AKC TDX Title each year. Rudy was one of the first three GSDs to earn a TDX in 2011.

Tracking is fun and challenging. You and your dog compete against the elements in a complex gaming in the fresh air of the great outdoors. As my tracking mentor said in a lesson: “Your dog has a nose, we are here to teach him how to use it and to teach you how to read your dog.” The teamwork tracking builds between you and your dog is beyond my description, but is revealed in the smiles on our faces. Rudy loves it and so do I.

Give it a try by taking lessons with your dog, attending tracking tests to experience it first hand, or volunteering to work at Tracking Tests (Clubs always need helpers).

CLICK TO READ ABOUT THE ADVANCED TRACKING TESTS OF IKE, AKA "RUDY"
CLICK HERE TO RETURN TO OUR TESTIMONIALS PAGE

Our Show ResultsCLICK TO LEARN MORE 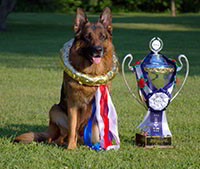 Review Us On Google + 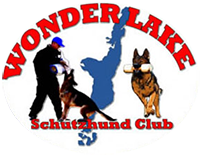